I really do dig my vintage Palm Beach madras jacket. It's got this killer muted color scheme, which steers it clear of go-to-hell waters. Even though I do tend to be fond of such things, I appreciate a garment that is big and plaid and yet understated all at once. 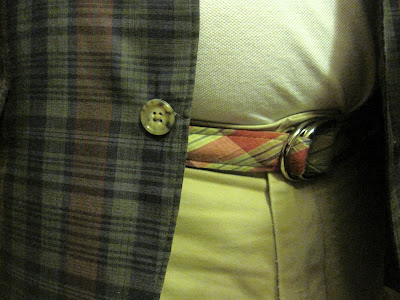 This jacket is set off nicely by the simplest things, like khakis and a white tennis shirt. Never one to leave well enough alone, I punctuated it with a madras d-ring belt. Two plaids together are tough, especially when they're both madras, but this combo was almost like a secret. 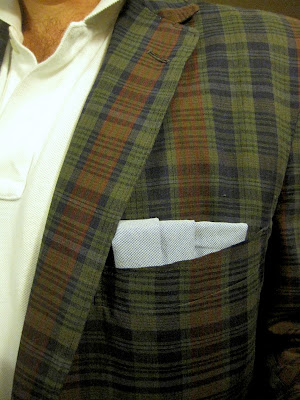 I've known a lot of guys who just can't be bothered with pocket squares, but if I'm wearing a jacket, I won't leave the house without one. It's a small touch, but it really elevates the look of an entire outfit, especially in the absence of a tie. 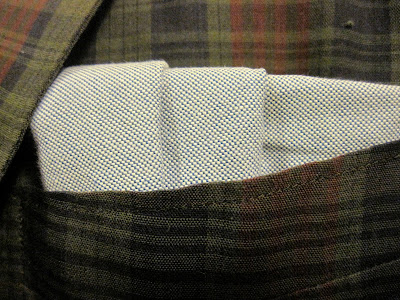 This particular one is actually just a piece of blue oxford salvaged from a well worn Brooks Brothers shirt. I'm really digging this idea of pocket squares cut from shirt cloth for Summer. Anyone cashes in on the idea, I'll sue you.
And with that, we steer the conversation away from three big fat pieces of tweed back to the thick humid air of late July.

That is one sharp jacket...I really like the muted colrs. Well done.

Why not put a discrete slit in the jacket on the inside leading through to the top pocket, then you can simply pull through a piece of shirt material from the shirt you are wearing!

No need to cut up old shirt then. I have no obection if you profit obscenely from this idea.

The Englishman in Africa

Funny, I have 15 dress shirts awaiting the conversion to pocket squares... In fact, talking with my local Paul Stuart guy about finding someone to roll and stitch the edges...

Great jacket... Wish I had your eye and patience for re-cycling...

I prefer using my old boxer shorts. So much softer when you have to wipe your nose. And some pretty neat patterns to boot.

Josh, you're my hero

I find old boxers make a fine hat. Floppy like a newsboy, but without the fussiness of a bill.

Is there enough material in a pair of boxers to get them converted into a necktie?

wiping your nose on old boxers eh? Why wait for them to be old, buy them three sizes too big and there will be enough slack to pull them up out of the front of your pants when you need to sneeze.

I have an old pair of my Grandfathers from WW1, they are a little worn and patched in places and the elastic is gone (I wear an elastic 'snake' belt with them) but they are still stretchy enough to pull out the front for nose wiping, spectacle cleaning, etc.

An Englishman in Africa

Is that a woman's belt?