Mrs. G and I like to think of ourselves as the crafty and somewhat eclectic type when it comes to home decor. As such, we wind up taking on a number of little design projects around the house, using re purposed second hand stuff. With a little elbow grease and some stuff from the hardware store, you can pull some real style out of what many people think of as junk. As with any thrifty endeavour, patience and perseverance are major factors to success. The following project began as an idea last Fall, and though it had its debut here last November, it only recently came to full fruition. 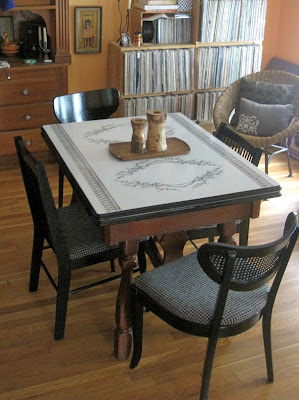 About a month ago we were at the Todd Farm flea market. The weather forecasted rain, so there weren't many vendors outside. As we wandered into the barn, Mrs. G. spotted this table on the left just inside the door at the first booth. An old kitchen table, circa 1930s, missing its chairs. On the wall in the barn was a message hanging by a thumbtack written on lined paper torn from a notebook saying to call Barbara if you want any of this stuff. So I called Barbara, whose husband answered, saying 'he's at Todd Farm, see, I told you we shoulda gone there.' Anyway, I managed to haggle them down from $125 to $100. And with that, we came one piece of furniture closer to having an Ikea-free house. 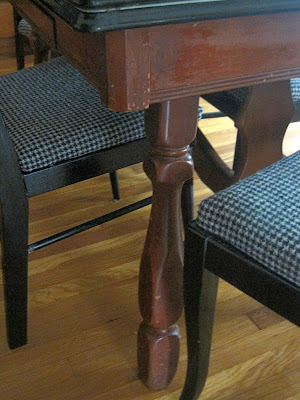 This thing is serious, some real heavy weight solid wood with a printed metal top. I had to borrow tools from the man in charge of the barn to disassemble it and squeeze it into the car. Check the built-in silverware drawer.

Some of you may remember the chairs project a while back. This table ties those chairs and the room in which they sit together perfectly. The table is heavy and wooden, belonging completely to the era of the house. Yet, it's printed black and white graphic top make it a cinch with painted black chairs upholstered in black and white houndstooth. And speaking of those chairs...one of them broke, and one of them just wasn't doing it for me. No matter, two more $5 chars came along to pick up the slack: 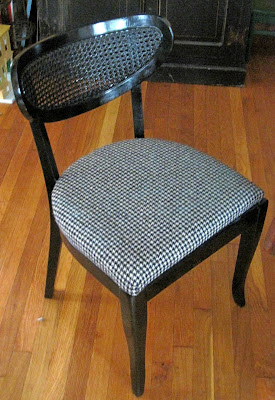 This chair, with the curved shape of it's back rest, echos the curved back of the chair across from it nicely... 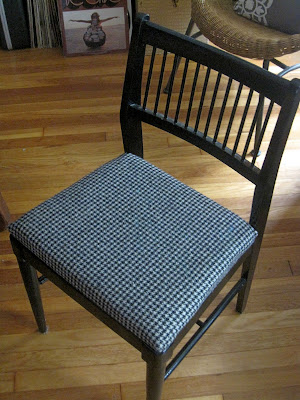 just as this chair, with its square shape echos its partner as well. In its first iteration (ahem, architecture school) the project came off pretty good, but in the end, it really gelled.

Now would be a good time to stress my opinion on the connection between style, eclecticism and open minded-ness.

It's no good wearing a costume or playing a part. Sure, you can know all the details of one thing or another, and deal them out with ease. But style comes from the combination of influences in a manner that is both comfortable and personal. Some days I might wear an outfit comprised of items from the 60s, 70s, 80s and present all at once, finished with a few touches that just don't seem to belong. In much the same way, my house is 100 years old, decorated with furniture and artwork from the 40s through the present in a mish-mash that is expressive first and foremost of the people who live there. My apologies for any unintended pretension, but this blog is, after all, a one man operation, and bound to the (more than) occasional narcicism.

Anyway, I guess my point is this: don't marry yourself to some narrow idea of 'cool' or 'style' or however you want to call it. Instead, trust your instincts, and take all the things that you know are cool and put them together. Therein lies the essence of true personal style. And at the risk of sounding melodramatic, a certain kind of satisfying freedom. 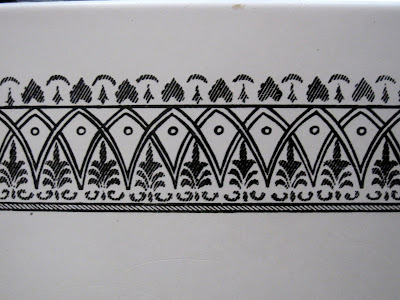 In closing, dig the post-depression design on this piece... 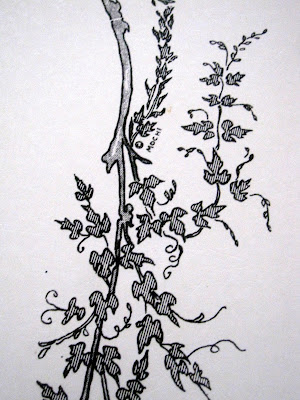 Love the table! When we made our last move, we did not purchase a single new piece of furniture ... everything in our house was 'reclaimed' from a relative or from long-term storage and/or ignorance.

I love this style of decorating. what a find that table is!

Nice find! You should -- if you haven't already -- check out that name, "Mochi". Ugo Mochi is a well-respected, early- and mid-20th century designer -- and originally from Italy. It must be in the blood or something . . .

I have a porcelain topped signed Mochi as well. Mine is a bit more Deco with straight fluted legs. It was painted all white. Years ago I stripped it and applied green stain to some parts. Probably ruined any value it had..