Sans Chaussettes (and the relativity of "go to hell")

I have a lot of socks. More than a guy needs, for sure. I just can't bear to wear them in warm weather. Now that I think of it, I probably haven't worn socks since May. Who needs 'em? It can be pushing 90 degrees and I'll wear long pants, a tie and a jacket if I feel like it, but socks just don't cut it. Many of you have mentioned this in the comments of some previous posts, so I thought a little dissertation on "going sockless" might be in order. 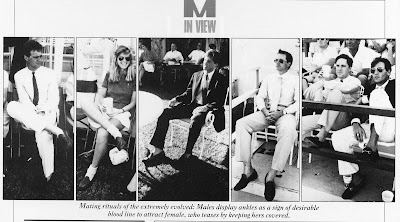 (photo credit: M magazine, by way of Tin Tin)
The photo spread above is from the mid 1980s, the original hey day of socklessness. Here, it's pictured as a mark of nobility of sorts (click to enlarge and read the caption, it's worth a good chuckle). Now, I'm in no way trying to belie the humbleness of my blood line, but I do like a bare ankle in the Summertime. There are, however, a few guidelines I adhere to regarding the sort of shoes suitable for this little affectation: loafers, canvas sneakers and moccasins. 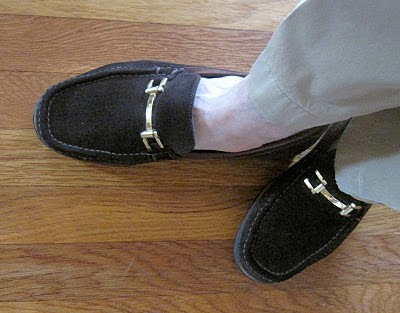 brown suede bit loafers. Not Gucci, but Italian anyway.The Italian bit loafer is a little abberation that has nudged its way into the canon of classic American menswear( note the fellow above in the aviator sunglasses)> Best worn with a bare foot. 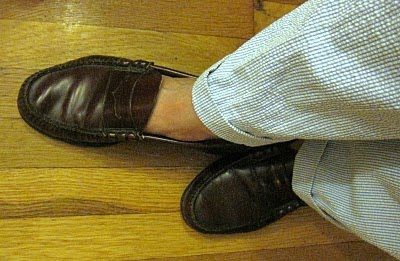 The brown penny loafer, also a classic with a bare foot, works well with shorts. That is, if you're the sort of guy who wears shoes with a hard leather sole with shorts. I'm not. Save this one for khakis, seersucker, and Nantucket red. Loafers like these split the difference well...dressy enough for a tie, perfectly at home on a bare foot. 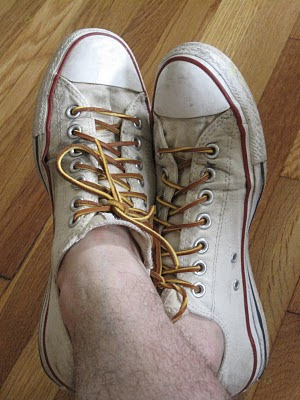 I love me some Converse Chuck Taylor All Stars. For me, natural canvas is a cinch, maybe navy blue or true white, but I'll admit that black or red high tops have earned their spot on the list as well. Low cut Chucks not only look well without socks, but kinda don't make sense with them. After all, the shoe itself is cotton. 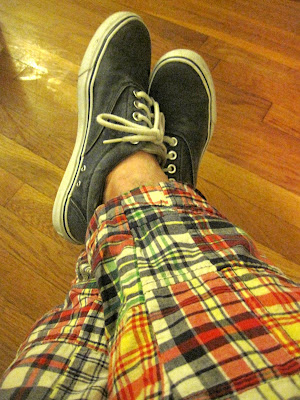 Navy blue boat style sneakers such as these Sperry's also demand socklessness. Again, the shoe itself is cotton, and nothing but casual.

and then we have my hippie shoes, my Arrow moccasins. The admittedly "nature boy" vibe of these shoes absolutely prohibits socks. 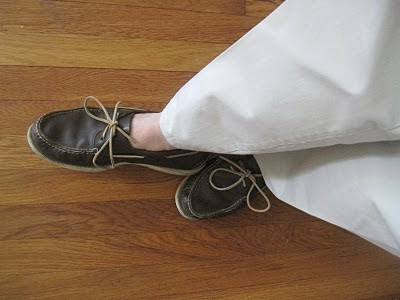 and of course, the classic Sperry Topsider, in dark brown with a white rubber sole. If ever a shoe wanted socks less, I haven't found it. The unchallenged classic with shorts, khakis, jeans, blazers, you name it...just not socks.

Not wearing socks should be an easy breezy affair...but it can run amock: 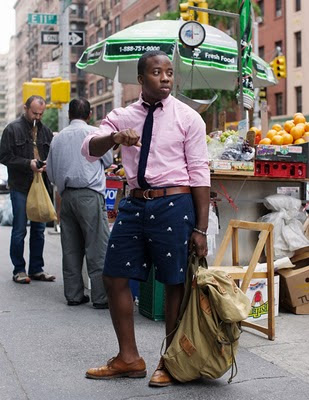 I don't want to get all bitchy and trash this kid. After all, he does look better than 90% of men on the street, and he's clearly taken an effort to dress well ( even if that effort mostly consisted of doing the Ralph Lauren dance...as a slow dance...). I'm willing to cut the kid plenty slack. But this recent trend of hard soled lace up dress shoes sockless? I'll forgive the tie and shorts combo, I'll forgive the looking-at-my-watch-staring-the-other-way-affected-New York-pose...but the brogues without socks thing has got to come to an end.
On the other hand, as a swarthy Italian Catholic, I'm gonna go ahead and give Jewish Ralph and this handsome young black fellow a million combined points for furthering the cause of wearing these kinds of things for their own sake. The more curmudgeonly types on the webs may be loath to admit that anyone of the unwashed savages(such as myself) has any right to wear this stuff, but, like the pants and the bare ankles said...go to Hell?
p.s my apologies for the fact that the last few posts have included only reposted photos or those culled from the internet. Photo uploading and editing difficulties on my end should be resolved soon.

OK, as long as we agree that dude in the RL photo is out on a limb, it's gustibus non disputandem on other socks issues.

A well tanned foot and ankle help finish off the sockless loafer look. My cadaverous winter feet need a bit of time in the sun before I'm willing to subject them to casual viewers.

Naaaaaaahhhhhh. Sockless brogues are delightful. I wouldn't wear them with shorts, as the gentleman above does (though I don't wear shorts, so...) but a bare ankle is sometimes exactly what the summer heat calls for, and a brogue is on this side of casual. It's a shoe with holes punched in it, fer crissakes! Plus, it's got a similar ethnic, working-class origin as the Weejun. Point, set, match.

I've always felt (even taking into account my own status as an unwashed savage) that if you paid for it, regardless of little that may have been, you have the right to wear it.

Wow, the brogues without socks look. I never thought I'd see someone giving it the thumbs down. For me..? A definite no-no. Can never understand it. And, it is so pervasive.

As an Italian Catholic, and thus a European, you should oppose the efforts of RL, "handsome young black fellows" (wtf?!), and other outsiders to hijack your style. You have a heritage all your own that you should encourage and promote. Don't let others co-opt it in the selfish interests of their own narrow branding campaign.

The kid in the photo, Ralph and I are all on the outside when it comes to the kind of stuff I like to wear. It really "belongs" to old white money. In Boston, it does tend to leak out past the narrow boundaries of the wealthiest families, so I always grew up with a slightly more than passing understanding of how it all works.

As for Ralph, like him or not, all marketing and politics aside...lots of young men dress better as a result of his ubiquitous presence than they would without him. In his own self-aggrandizing way, he's almost preserving some of the sartorial stuff we hold dear. Brooks and Press and the others have been dropping the ball on this for years, having ignored my own generation completely and now the next one.

But this is really all fodder for another long winded post.

The word we used in high school for people like that black fellow was "poseur."

As for you? This xanthocroidal Scandinavian Protestant agrees with your basic tenet: more people dressing nicely--or at least trying to--is a Good Thing. You, though not as influential as our friend Ralph, are doing the same good work as Mr. Lauren.

Long may you blog!

Living in California, I see the sockless look year round, I've always really liked the look & completely agree with G on the shoe choices.
Is it ever appropriate to slip off your shoe (to cool) in public? Say under a table @ a restaurant or something?

Especially not at a restaurant.

As an avid thrifter myself, I am open to any great finds that come my way, including traditional American pieces from J.Press, Andover shop etc. I have never worried about not belonging to the elite club where this style originated from - frankly, I probably enjoy the contradiction. As an Englishman, maybe I get a pass as I am linked to the WASP motherland, but as a black man I clearly can’t pass (and I wouldn’t want to). Any entitled snob who wants to tell me different can "go to hell."

I feel the critique of the young man in the picture is a little unfair. “Affected” and “poseur” coming from two blogs that document and discuss your own well-thought out outfits every day seems a a bit like the pot calling the kettle black. (couldn’t resist!)

Your blog’s strength is your willingness to push the boundaries, and mix and match your great finds, not dissecting other people’s style choices.

Regards from wonderful New York city, sockless with brown monkstraps with no plans to ever stop...

Couple things. Ralph sells a life style that doesn't exist. Even for him. Keep that in mind the next time you're ready to saint him. TWo, did you run my clip through Aaron Shitzenbergher? He heads up Rights and Clearences for The Trad. He's a testy sort but you may be able to contact him before he begins litigation.

I'll be the first to admit I'm probably the most "affected poseur" on the block.

Who said anything about canonization? I just figure, even if the whole thing is a bunch of marketing b.s., anything that gets the young kids in a tie sometimes could be worse.

Besides, last I checked, J.Press was selling a lifestyle that barely exists.

And tell your Mr. Shitzenbergher shaking me down for money is like trying to squeeze blood from a stone.

I wear brogues sockless with shorts, khakis, jeans or (sometimes) dress pants (of the cotton/linen variety). I think it's a fine look.

I'm personally not a huge fan of loafers, but I do like brogues. Different strokes, I suppose.