Off Season: A Family of Orphans

It's the middle of July, and as I sit on the front porch with the laptop drinking canned beer, it's pretty damned humid, even at a quarter past twelve. Here in Boston, it's something of a local sport to complain about the weather, which infuriates me, so I won't. Allow me only to apologize in advance for discussing tweed at such a time. But the following has been in my house three weeks already, and weren't no way I could sit on this till November... 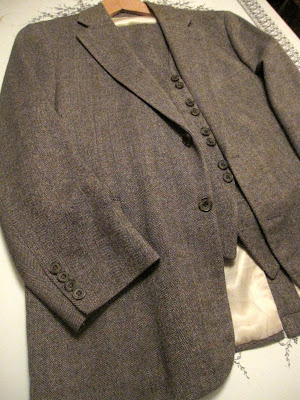 A three piece tweed suit. This is something I've wanted for a long time, but since it's not the 1940s and we have reasonable heating most places, and I definitely do not lead the sort of life that asks for any kind of suit, let alone a three piece, let alone one in a "country" style, I had all but given up on the idea. Then this beauty turns up in a 40 short, for $7.49, all three pieces. 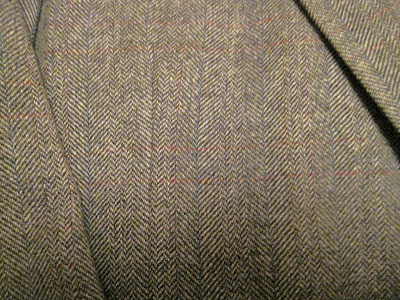 One Hell of a piece of cloth, thick and warm, but with a soft hand. The perfect shade of brown/grey for tweed, with an over plaid in orange, blue and green that my cheap camera doesn't do justice. In short, this suit goes wit every color shirt, tie or shoe you can throw at it. 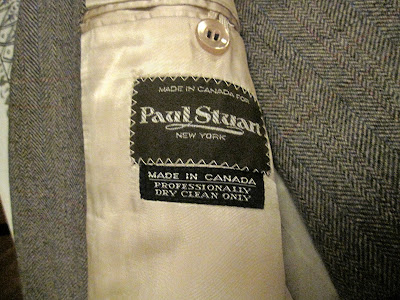 Yikes, Paul Stuart? Ooh, la la. I don't mean to label drop, but these guys currently offer a cotton seersucker jacket for over $1200. Not a bad deal for under ten bucks. 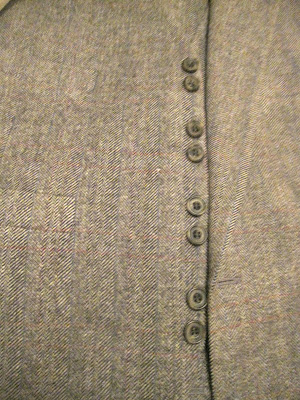 The styling of the vest is perhaps a bit odd, what with the groupings of two buttons, but I think I can make it work. 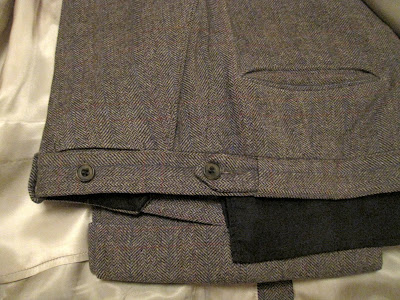 Side tabs and brace buttons on the pants, sans belt loops. C'mon, we've got some pretty hot detailing going on here.

I imagine this suit will be a real killer on a cold day with a thick white oxford button down and wool knit tie, topped by a tan cashmere coat. If I only I had a train to catch...in England...pulled by a steam engine...

But this suit is almost less of a suit and more a Family of Orphans. You see, I run across so many parts of suits that simply cannot exist without their counterparts. But this suit will likely serve me better as three separate garments. The pants will be stunning with a big fat cable knit sweater and a Barbour jacket, Bean boots on my feet. The vest I'm seeing with wide wale cords and a heavy cardigan. The jacket will go with khakis, jeans, grey flannels and who knows what else.

Don't worry , I'm not about to go wishing it was cold outside, because my current uniform of brightly hued pants and white tennis shirts has been treating me just fine. But it nice to have something to look forward to.

that is the finest suit upon which I have laid eyes. All you need is a Golden Retriever, a shotgun and a suitable country background

Wow, what a find! I've been looking for a tweed ensemble such as this.

That is an outfit perfectly "suited" to a tailgate at the Steeplechase Races on a cold November Sunday....
Great find!

Man, I wish that my local thrift had that level of goods! That is a great garment and not only would I have killed to have had while I lived in the UK, it would be great now (well, at least last winter during Snowmageddon).

G, love all the great finds you put on this blog. Can I ask how you go about figuring out what's in your size when you are out shopping? I'm new to this whole vintage/thrift thing, and pretty weirded out by this strange new world where manufacturers don't print any sizing info on their garments.

So when you say that this suit was a "40 Short," did you figure that out in the store, or when you got home? Do you bring a measuring tape with you when you are out shopping?

Obviously you can't really know how it will look until you try it on, but trying on a dozen pairs of pants is time consuming, and some places near me don't have fitting rooms, so I'm trying to get better at narrowing down my options before I try stuff on.

Another way to wear this would be with two of the three pieces: vest + one. I'm particularly fond of the "matching vest & jacket with odd trousers" look, and this baby is made for that.

Dude. You are the perfect size for thrift shopping. Suits especially. Treasure this suit. I hope one of your sons is able to inherit it.

Okay, I hate you again, and even more! A tweed suit worn as separates is a great idea, one I had my ownself, but I'm lookin' at multi-hundreds of dinero from Bookster. We just don't get those great heavy clothes here in the South even on sale, much less in thrifts.

OT, will there be a Fall "do" like the last flea? Would be a good time for me to head North

It's would be wonderful to find any one of these pieces on their own, but together... You sir have hit the jackpot

I grew up in the South, in the 60's, in a family with rules for everything. Your comments about how to wear this suit brought back so many memories and made me laugh at how stifling those rules seem today.

For example, my father believed a "polo shirt" (his old school term for a button down shirt) should NEVER be worn with a suit. "Polo shirts" were weekend wear...to be worn with a sport coat and tie.

Similarly, he didn't believe a suit coat nor its weskit (his old school term for vest) should be worn without their matching pants...without a change of buttons. Dad believed suit buttons required a suit and should be switched out for blazer buttons or woven leather buttons before being worn separately.

Although I'm glad we no longer live with such rigid rules, I long for the days when such attention to detail was considered an important part of being a gentleman.

Do you think the former owner was a Coldstream Guardsman from the British Forces? (they group their buttons in twos). possibly not but its bit of trivia for you ...

Please dont wear a white button down shirt with this, it would be wrong on a number of levels.

Absolutely stunning. I also like to picture myself in London any time I wear a suit. Which, sadly, is not that often.