Though I have written about this topic before, it's been a while since I offered the subject of pattern mixing up for debate. Most guys don't have much trouble with two patterns, such as a striped shirt and foulard tie, but three patterns is tricky. What follows may even kind of sort of qualify as four...or at least three and a half. 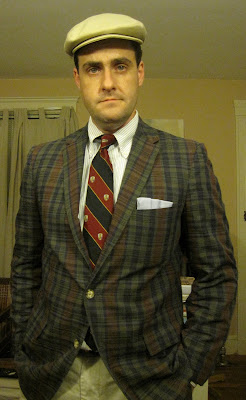 I realize I wore this jacket only just the other day, but it's season is brief and I'm trying to get some mileage out of it. The tie is vintage 1980s Brooks Brothers, a $ 2.99 acquisition from just yesterday. An old Sero oxford, J.Crew khakis and a cap from The Village Hat Shop complete the ensemble. 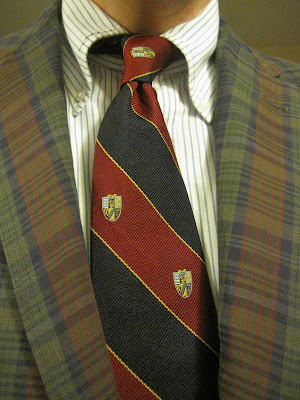 I actually had no intention of wearing a jacket today, but this tie was practically demanding it. Of course, my first inclination was to keep it simple and reach for the trusty navy blazer. As I stood in the closet, it occurred to me that this was going to look an awful lot like a school uniform, and a fake one at that. Given that I was already pushing the possible bounds of integrity by wearing an imitation regiment tie (or maybe it's from an actual regiment, who knows? Either way I've never been in any regiment, so the point is moot), that would have been too much. Instinctively it struck me that this madras might work. It shares all the major elements of the overall color palette, with just the right difference in scale, the shirts stripes being fine, the jackets plaid being medium and the tie being bold. The inconsistencies between the two tones of burgundy, and the gold accent stripes on the tie give the whole thing just the right amount of maybe-it-really-doesn't-match-but-I'm-beyond -caring bit of insouciance, carefully considered of course...or maybe, it just doesn't match. I don't know. What I do know is that I felt comfortable in this, which goes along way toward putting this kind of crap over on people. That, and acting as though there is absolutely nothing absurd about dressing this way by choice in the year 2010. 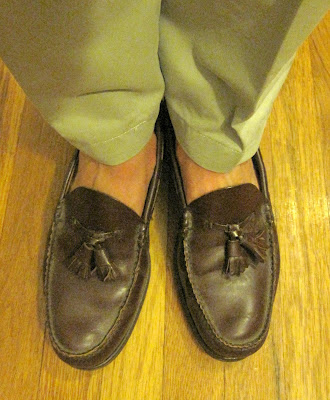 At the bottom, some no name USA made tassel loafers, nice leather. I suspect they might be old Bass Weejuns, just because they have that vibe about them. In any case, for $3.49, who cares?

Anyway, pattern mixing is kind of like playing music. It takes practice and time, until after a while you can just sort of feel it. But you also have to be careful not to bust it out too aggressively all of the time. After all, imagine if every song you heard had a drum solo...

There ought to be ONE word to capture the "I'm-beyond-caring bit of insouciance" that wears the 3.5 patterns so jauntily.

(Interestingly, hubby and I just watched an interesting video last night - "The Visitor" - featuring a drummer.)

rescued a muted madras this weekend http://tinyurl.com/2f2wohm agree, have to bust it out w/ the slightest provocation...

It's not a regimental tie, real or imitation, because the stripes run the wrong way for one. All British regimental ties have the stripes running "from the heart" (i.e., as you look at the man, the stripes go from his right shoulder to his left waist). In order not to offend the regimentarians, someone in America (apparently Brooks Brothers was the first, but I'm not certain) decided to use the same patterns but run the stripes the other way. Voila! The American "regimental" tie was born.

It's a great tie and a very nice combination.

I think it would look better with a solid colored tie. There are too many patterns going on and I would tone it down a bit myself

But you see, Anonymous 5:27, the patterns are the point. In the first photo, you can't even tell that the shirt is striped, and from far enough away, even the jacket might look (nearly) solid.

Notice that each pattern is of a different scale, and that none are really competing with another.

Now, this is not an Alan Flusser-level combination, but then again, he is the undisputed modern master of pattern mixing. (picture shamelessly stolen from tintin)

Having said all that, you have to know what you're comfortable with. If you think that an outfit you assemble has "too many patterns going on," then you will never look good in it, because you won't be at ease. Being at ease in what you wear is the ineffable quality that makes or breaks even the most subdued outfit.

All good till you sodded it up with the cap. Plain silly.

Smile every once in awhile. Can't hurt.

Me and my crooked teeth...

Smart look from head to toe. Great for Summer

Giuseppe- as a fellow drummer, I'm bummed at your closing statement. Any song would better with the right drum solo. Even a church hymn. I think that's why I never liked going to church.

Even though a lot of people would think that there is too much going on (usually for them to wear). this has come together very nicely, and look intentional so is always going to work.

I heartily approve--pattern mixing is an art-form. I'm often amazed at how repressive I find men's wear; sometimes the only way to achieve self-expression and still fit into the mold is by bending the rules a little!!

"Repressive"?! Really? What a reactionary way to look at it!

What's truly repressive is the absence of a dress code (explore that thought here, here, and here). Real repression is the forced rejection of proper attire, as occurs at Silicon Valley companies like Apple, Google, and Yahoo.

A coat and tie free a man to look professional and focus on his job. The default "business casual" look of shapeless polo shirts and ill-fitting chinos allow far less expression than a suit and tie; are unprofessional; are demeaning to the wearer (as he is forced to dress like a child instead of an adult); and reduce the wearer to drone-like status.

So gimme that good ol' jacket and tie!