Put Some 'English' On It

It's certainly no secret that we Italians live to dress, and our contributions to the canon of classic menswear have indeed been great. As an Italian who grew up in Boston, a deep understanding of the tenets of traditional American style operates in tandem with this. But it would all be for naught if it weren't for the English.

Thankfully, I live in a place that gets cold enough to really bring the English style out in full force. If we want to get all crazy and picky about it, we could talk about how these are "country clothes", suitable for weekends at the estate, strolling with the hounds and shooting ducks. But truthfully, I could live my life in a t-shirt and shorts and no one but me would notice, so who cares about that? Damned if this stuff doesn't keep you warm of a chilly night. 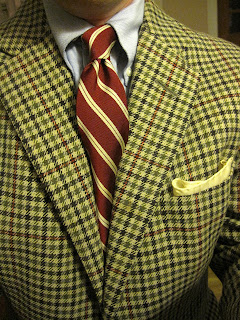 You may remember this jacket, acquired in February. It's about as English as they come. I could gush about the fabric, but I already did, just read the link. I know this looks like a sports jacket, but it's really a short coat. It's so heavy, I should probably hang it in the front closet with the Barbour and the toggle coats, rather that with the suits and jackets. It's so heavy, in fact, that I only wore it twice last Winter. Too thick for indoor use, it's best used as outerwear. The shirt is old Brooks Brothers, likely early 90s, with the elusive perfect collar roll. A thoroughly American convention, thoroughly heisted from the Brits. The tie is old Brooks Brothers, 1960s is my guess. Both, though American made, are right at home with this piece of duck hunting gear. 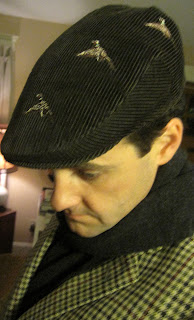 In keeping with the idea of shooting water fowl, a corduroy cap with embroidered pheasants by Barbour is a cinch. 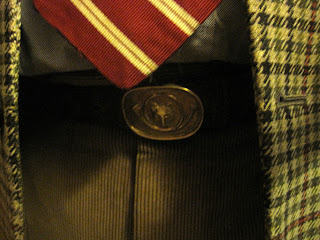 And because I'm a garish Yankee with no right to even dress like a monied Yankee of English descent, I'll just go ahead and take things a little too far with a fox hunting themed belt. 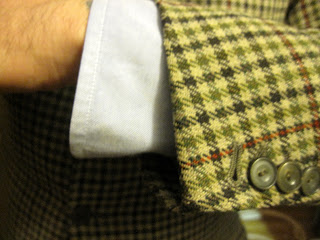 Garish as I can be, I don't normally go for the open working cuff button, but in this case, how can one resist? Seriously, that cloth... 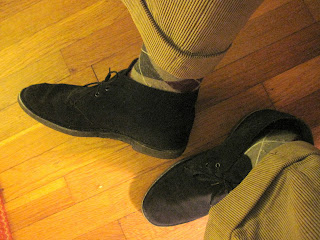 Another corduroy, in a narrower wale, for the trews. Something about multiple corduroy statements has got Brit written all over it. Argyle socks hail originally from Scotland, though mine are from Target. I don't get to wear these vintage English made Clark's in loden green suede often enough, but clearly nothing else would do here.
I really meant that last post to hold you over until after the Top Shelf Flea, but I had so much fun putting this one together, I simply couldn't help but share.
The moral of the story is: when the leaves turn and the chill wind blows, if in doubt, go British.﻿
Posted by Giuseppe at 10:17 PM

The whole outfit is splendid. The colour coordination works a treat, you must have felt like a true gent walking down the road.
I have a very similar version of that jacket, but the two-button version, also with working cuffs.

You, Sir, have nailed it. Huzzah!

New York Is For Haters said...

Top to bottom, this outfit straight kills. I'm loving the cooler weather that is slowly arriving in the Northeast, allowing for the heavier clothing to come out of storage. Enjoy the flea. Unfortunately, obligations are keeping me in the New York region this weekend.

That's an amazing looking kit you've got on - it all works - the colors all work together. Very cool cap you have there too.

that jacket looks bulletproof. brilliant. cuffs make it #nextlevel as the kids say. dont they? they say that right...

Gonna stop with the "English" thing? The stuff you like's all SCOTTISH man!
Shetland wool "Shaggy Dog"? Scottish
Harris Tweed? Scottish
Estate Plaid? Scottish
Tartan/brogues/waxed fabric/Macintoshes/bond caps/horn buttons etc etc etc all SCOTTISH.
(for those pedants who will try to point out that Barbour is a Northumberland concern...the cloth is loomed and waterproofed in Arbroath)

"You may remember this jacket, acquired in February. It's about as English as they come."

Bah! Blasphemy! As British as they come, perhaps, but surely you're not letting the English claim responsibility for that glorious Scottish district check?

The jacket (but not the hat) is the dog's bollocks.

It's a great look, but the jacket is just way too tight across the stomach. You can visibly see the button stressing.

Nice nice jacket but perhaps the wrong size for you?

However, Pheasants are NOT waterfowl...just saying.......

Fabulous. Gentlemen, bow before the master.

now you are Italian , when did that happen? Im of Italian blood but lived my life entirely in london so im a londoner. i live in italy now merely by chance. i think that if you were born in usa then you are a yank not an italian. good outfit this time and by the way italians in italy look crap come and get the metro with me in the morning in milan, see if you see cool

We've been through this before, haven't we? Sure, I'm an American. But I grew up in a house with old folks who barely spoke English. Their culture and the way they did things had a prfound effect on the person I became. So yeah, I'm Italian, too. Haven't you ever heard of heritage?

"It's certainly no secret that we Italians live to dress."