I know I've said it before, so allow me to repeat myself. White suede bucks, as classically American as anything gets, may be a staple in the Summer wardrobe, but they carry on well into Autumn. I like mine a bit dirty, with tweed. 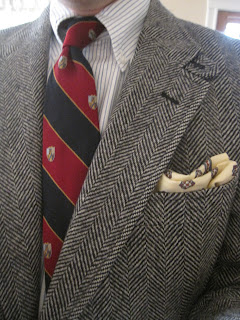 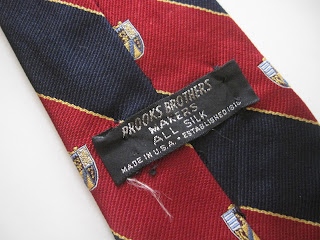 Fake school stuff is a touchy subject. Wearing real school stuff if you didn't attend said school is sketchy at best. Wearing fake school stuff mat be downright tacky. We'd all love to blame Ralph. But this old tie is from Brooks Brothers, with a black and white block lettered tag that dates it likely in the eighties, or older. Who cares? You, me and maybe four other guys? It's a good looking tie, I like it, it cost a buck and so i think I'll wear it. 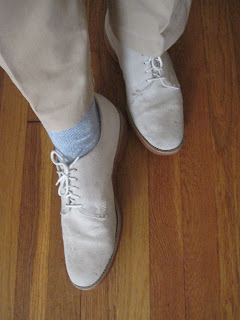 Finishes nicely with khakis, pale blue cotton crew socks and white bucks. The more scuffed the better. I could throw up a million examples of this basic combo from the Life archives, but I won't bother, mostly because I'm sick of people illustrating blogs with ivy league shots from the Life archives...just sayin'. Suffice to say that white bucks in Fall and even Winter were a staple with tweed and thick flannel slacks starting in the 1920s. Some time in the last thirty years we collectively decided that they should only be worn in Summer, but that just sells these shoes short. White bucks and seersucker may be classic as all hell, but it verges on costume. White bucks and tweed? Killer. White bucks and a big wool sweater? Killer. White bucks and a toggle coat...not for the faint of heart, but also killer. 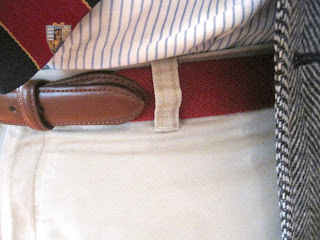 Belts can be tricky with white bucks. In Summer, nothing goes as good as a d-ring striped ribbon belt. in Fall, it's not so easy. Sure, I guess brown leather works, but I prefer a sturdy surcingle. This example, in brick red, picks up nicely on the rubber soles.

In the Summer, stick with topsiders and canvas sneakers. Save your white bucks for cool but sunny days when the leaves hit the ground. Thats when they really hit their stride.
Posted by Giuseppe at 9:53 PM

This is a very nice outfit, I really like it. I personally would´t wear the light blue colored socks to this outfit, but that´s only a small detail. I can´t say which color fits better for me ;-(

Looks great. I applaud your courage to wear white bucks in Fall. I agree it definately was done in the past.

You just defined my Wednesday meeting attire.. I have all the parts - just need to put them together. Thanks.

That's a nice all-round combination. I don't think I could wear white suede shoes - just a personal preference - but you seem to pull it off fine here. That tweed jacket is tremendous, pure autumn Sunday. Bravo.

I went to school in Belgium/England (divorced parents!) and school uniforms were de rigeur so I got a taste for school ties. I have two originals and several that have the school tie 'look' and I wear them. Stuff what the purists think, I'll wear anything I think looks right for me.

I just scored a pair of cole-haan dirty bucks at a thrift store ($4.95). They are good shape, but just need a good cleaning. What do you do to clean up suede?

Did you type this in the dark or is there a secret message I'm not decoding properly? ;-)

Where I live in the southwest, white bucks are almost a year round shoe, I wear them with everything short of a parka or an overcoat. Black/white tweed is one of my favorites because of it's versatile nature, I just scored a similar Harris number. I think this is the classic American fall look.

Lots to treasure here, Wardrobe, apart from your lamentable spelling - and Roger, it's 'de rigueur', you old flamand, you. I understand inspiration bursting the tedious bounds of grammar and orthography, but I think it's worth getting the small stuff of language right - you get everything else right, most of the time (not that green blazer, though). Take a leaf from the Trad, who hates being corrected, but cares, and takes it like a man.

I've been waiting for this post--love it! The socks are wonderful, and the tie absolutely makes the outfit.

If you can't read the sooper seekrit code, we aren't telling you what it means ;-)

Never been a big white buck fan, but that's a nice outfit for a cool sunny day

Duly noted, corrections made. Yikes, that was a lot of mistakes.

Feel free to point out my shortcomings in a gentlemanly fashion any time you like.

I love the tweed! I scored two harringbone tweed jackets last winter, a black and white and a brown and tan, for three bucks a piece at a thrift store. I'm actually wearing the brown one today with a pair of camel corduroys. Tweed and corduroys are two of reasons fall is my favorite season!

Still on the look out for a pair of white bucks at the right price.

I feel I can speak with a certain amount of authority on the white buck: My mother shod me in them for my first birthday party (in 1965); I've lived below the Mason-Dixon Line most of my life. You are free to wear white bucks in TN, GA, NC, SC, and environs after you put your boat away for the winter (Memorial Day) but you will wearing them in Social Siberia. You always take a bottle to a dinner party, you always write a thank-you note, and no white shoes after Memorial Day, not now, not ever. In these parts, its simply called "home training."

I'm telling you, check the Life photo archives. White bucks in Fall were quite common in the past.

Besides, we can get all prickly about rules like white after Labor Day (Memorial day is the day the season opens, not closes), but in a time when men can no longer to put a suit on for a funeral, it's more than a little irrelevant. We've got bigger things than that to worry about right now.

oof! the jacket is a good one.
where are the full body glamour shots?
:)

There are some grammatical mistakes in your post, but otherwise I found it somewhat useful.
I don't think it's up to anyone to judge what people's posts should be about. Why not allow everyone to just say what they want (in designated threads, ofcourse)?
In my humble opinion, there's a lot of B.S. on this topic all over the internet. How do I know you are not just trying to sell something?
Look at me I'm posting comments. Feels good, I hope my ramblings don't get removed by the admins :)

The only cure for postmodernism is the incurable illness of romanticism.