The Rules of Breaking the Rules

Regular readers of this blog will note that my proclivities in matters of dress tend to lean toward the New England Traditional style, with some variation. As such there are particular rules I tend to follow, a loose, self-inflicted code of details. High on this list of rules are plain front pants and single breasted jackets. But rules only work if you break them sometimes. The trick is to break them successfully.
Today I purchased a suit which runs counter to almost every rule of dress I observe, yet in some inexplicable way was the inevitable newest piece of the Affordable Wardrobe: 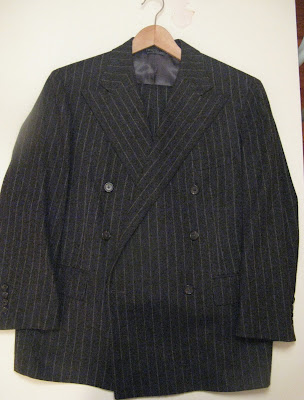 Double-breasted suit in grey flannel chalk stripe, by Polo, $15.99 The jacket is a 6/2 stance, but pressed in such a way as to favor 6/1. Sort of a double breasted version of 3/2. (Look at all of those silly fractions! What a way to talk about clothes! seriously...) 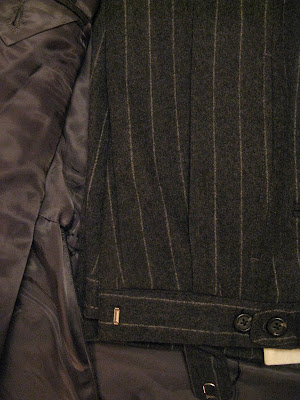 The pants have brace buttons only, no belt loops, and shallow inverted pleats, with side tabs. If you're going to buy pleated pants, the only ones worth having are with shallow (repeat: shallow) inverted pleats. Deep outward facing pleats tend to billow out in such a way as to make a man appear as though he's wearing a diaper. 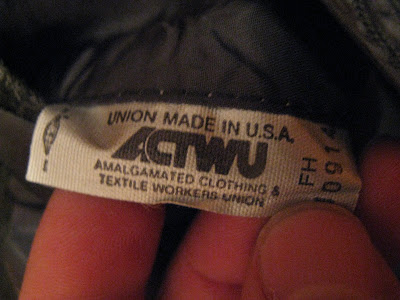 Last but not least, the magic words: made in U.S.A.

I shouldn't like this suit, but I love it. The cloth is thick and butter soft. I suspect its partly cashmere. The chalk stripe is classic. And despite its being double breasted with a fairly wide lapel, the shoulders are only very lightly padded, like a sack suit. The jacket needs to come in a pinch and the sleeves are a bit short, easy alterations.

This suit is going to look awfully rakish with a white oxford button down, knit tie and brown suede shoes, , maybe even a v-neck sweater underneath, all things which are "against the rules" with double breasted, incidentally. The only way to wear it.

An occasional insouciant disregard for the rules: another valuable lesson punk rock taught me.

Consciously breaking rules as you do is an intentional decision requiring a sophisticated awareness of rules. Well-done, on your part.

This is substantially different from a loutish ignorance of rules--which is what we see all around us.

My experience has been that it is the deep pleats that lie flat, while the shallow pleats almost always open up (unless one stands at attention all day long.

Deep pleats require the manufacturer of ready-to-wear trousers to use more cloth. Narrow pleats were a cost-cutting measure foisted off as a stylish innovation.

By the way, I like the acronym NET (New England Traditional), which is different from "Traditional" (which includes leather motorcycle jackets, it seems).

Spelling rules are not meant to be broken.

I'm all for sartorial rule breaking, so break away. Just don't break a leg. Handsome looking suit. I would be itching to wear some black semi-brogues with it.

You're right about the deep pleats vs, shallow pleats,but I find for my own shape that deep ones always billow out.

Duly noted and corrected. If it weren't for the invention of spell-check, I'd have wound up in the remedial class long ago.

Black semi-brogues, french cuffs, bow tie...the other only way to wear it.

What a steal! Great suit and you're way of wearing it sounds very intriguing. Please post a picture of that ensemble when you get a chance. I'm a big imitator of the well-dressed. It's the only way to learn!

Rule #1 of rule breaking is knowing the rules. I agree with Anon #1. When some one is just ignorant of the rules it is fairly obvious. Breaking the rules in the right way takes guts though. I love the suit though I don't think I could ever pull it off.

Don't forget that rule pertaining to the wearing of button-down collars with double-breasted suits.

The Double-breasted jacket parid with jenes is alwayas a good punk rock FU to the rules i think.

Incredible find. Very classic suit, it's a keeper. My experience has been that if I wear trousers with braces a little bit higher in the waist than you would jeans or chinos, the pleats will hang properly and not bunch up.

Beautiful suit, I've been looking for something like it. No rule being broken here - it's a classic.

Unless you wear it with sandals or something.

Is the jacket vented?

I would play around with the buttondown - oxford cloth with the heavy suit fabric light be a good mix - and either get the jacket pressed back to its proper configuration or simply button it at the second (higher) button and steam it a couple of times.

How did it cost 15 dollars?