Just the other day, I found this lovely burgundy necktie with white pin-dots. Its, just the right width, hand sewn, and the silk is top rate. A good score for $1.99 : 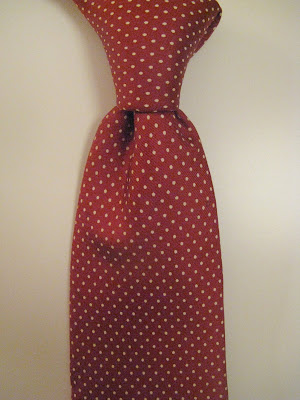 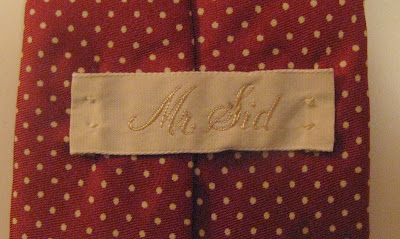 No big deal, I'm always buying ties for a couple of bucks. That's only the beginning of today's story.

I remember seeing things from Mr.Sid turn up at the original Filene's Basement all the time. The stuff was always really expensive, like $800 pair of slacks expensive. Even at the deep discounts of a place like "the basement", the prices were prohibitively high. I always thought it was really nice, but never really understood the price tags. So when I came across this tie, I chuckled for a second then bought it.

I decided to check out their website yesterday. While I remember the stuff I used to see as being exclusively house label, they appear to be retailers of brands like Zegna, Etro, Brioni and Bally shoes, in addition to running an extensive made to measure department. Perfect for the kind of Italian fashion slave who can afford to spend as much on his clothes each season as I used to make in a year when I was employed.

Then I see this picture on their site: 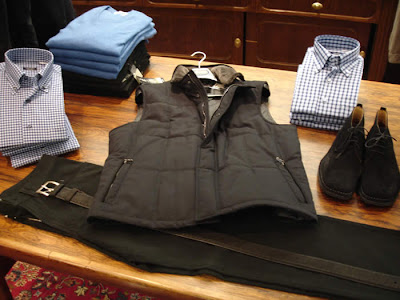 and as I'm looking at it, it occurs to me that I have some kind of close facsimile of every single item in the photo: 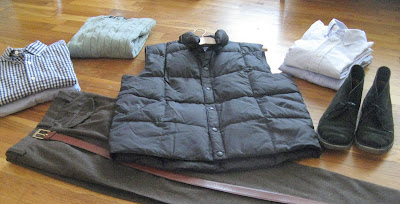 Which brings me to my point about relativity.

When a store like that puts together the display in the picture, they are trying to sell you a sensibility about the way in which items work together, the composition of an outfit from its parts. Sure, they would like it if you bought it from them, but we can't all afford that. This shouldn't stop a man from understanding how clothes work, because that skill is free. And if you can foster it, you can figure out a way to pull it off within your own budget, whatever that is.

When I see a guy walking around in sweatpants talking about how poor he is and this all they had in his price range at Target, I call that the "giving up on life" style. Its an excuse for laziness, nothing more. Style doesn't care about money.

If I walked into the kind of restaurant where Mr. Sid's customers eat in the above outfit, I'm willing to wager 9 out of 10 men in the place wouldn't know the difference. Its all about a keen eye paired with proper comportment. Style doesn't care about money.

And not for nothing, but aside from the vest, which I bought about a month ago, I've already owned this stuff for a while, since well before they put it all together to photograph it. Style doesn't care about money.

My intention here is not to brag. I only mean to help people understand that anybody, and I do mean anybody, can be well dressed if they want to be. A lack of money only helps. Anyone can blow a lot of money in a fancy store, but you really have to 'get it' to pull it off on the cheap.

Brilliant! You have completely summed up the Emperor Has No Clothes (pun intended) reality of high end clothing. Especially high end men's clothing in the classic/trad vein. The only way to justify the exorbitant pricing, is the illusion of exclusivity the high prices and marketing communicate. Even if you purchased your clothes retail (God forbid) it would still be much less then the high end stores. The fact that you purchased your clothing second hand speaks to the quality of more modestly priced items, though even the most "illustrious" labels show up in the thrift stores eventually.

Gorgeous tie, hope to see it worn in a future post.

This blog has really put into simple terms a lot of things that I've been thinking for a very long time. As sort of an "outsider participant" in the high-end clothing nonsense, it's nice to see a fellow heretic putting things into context so eloquently and succinctly. Keep it up.

I love this phrase ""giving up on life" style". So true!

It takes no more effort to put on a nice pair of slacks and a sweater than it does a pair of sweatpants and a t-shirt. It's all about making the effort to look decent. I think when you look good, your demeanor changes and you act better.

Very much in agreement with the feelings expressed in this article - the simpler the style, the less there is to go wrong, and the more opportunity you have to show how exactly what being stylish means. Good job.

I found a Mr. Sids tie at Second Time Around with a navy blue ground and yellow dots. One of my favorites.

I have that LE vest too. I was very disappointed when I saw an older one in a thrift store and realized how bad the quality had declined.