Here's a guy who dresses like a man of consequence, Sir Topham Hatt: 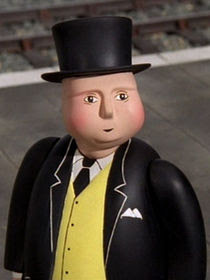 You may remember that I have a 2 year old son. He, not unlike millions of other kids, is obsessed with Thomas the Tank Engine. I know many parents find this sort of thing an annoyance to be suffered through, but I like this show. The fact that so many children take such a keen interest in a show about a railway populated with steam engines and run by a titled gentleman who wears a morning coat and top hat gives me hope for the future.

At least the kids are seeing characters on t.v. who wear ties and take great pride in their work, which is a better example than most t.v. would give them.

(forgive me this small amount of dorkery. I am a dad, after all.)

p.s. Sir Topham Hatt's weekend casual attire consists of tan cavalry twill trousers, a regimental tie and a blazer with a crest. Let the kids watch this show all they want.
Posted by Giuseppe at 7:29 PM

If you have a toddler, the Thomas posse is unavoidable. I have half a dozen Thomas the Tank Engine episodes cued up at all times on the Tivo (my little guy is 2 as well). These are the Thomas years.

I didn't even realize this was still on the air. I am now 20 years old, and I grew up with this show. I love it! Much better than the stuff on Disney Channel or Nickelodeon.

Thomas...is based on the E2 Class 0-6-0T locomotives built for the London, Brighton and South Coast Railway between 1913 and 1916.

Yeah, my son still watches it, though this season I noticed they added computer animated segments. I remember when my son first started watching the show, I thought to myself, "if this had been on when I was a kid, I would have totally been in to this."

There is no dorkerey here...

You're as cool as they come... little train engines aside.
Lucky you!

As a child 50 years ago, I had a copy of the English version. Sir Topham is known as The Fat Arranger in England. Name was changed for American sympathies.

We have 1/2 a basement full of Thomas stuff from when our grandson was little. Someday maybe the next will come.

It's The Fat Controller actually.

I have three boys hence, we have all things Thomas (books, trains, videos, clothing). What I love especially is the writing...and the narration. We have (video) versions read by Ringo Starr, Alec Baldwin and George Carlson! They're all great "voice-makers." Our family is constantly quoting these old stories.

"Your birthday is a great occasion" - Sir Topham Hatt

P.S. Two year olds pick up quite some vocabulary watching these.

"Come on, show a wheel." -(the stationmaster to James, when he refuses to work)

I love the Fat Controller's dress sense too... and the world of Thomas generally. I've not seen the television version but my dad read the books to me when I was a nipper. Happy days.