A Stroll in the Park

After the shocking "Incident of the Leather Jacket" yesterday, and the subsequent trip down memory lane it started, today I was in the mood for some full bore outmoded Beacon Hill togs: 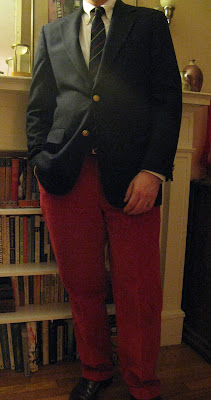 Red cords, with my new flannel blazer. You may recall this as the mystery jacket from a few posts ago. Purchased brand new for $3.49, I found another old blazer at another store, also $3.49 that I bought just for its buttons. The jacket is all the better for the brass, I think. A ripping good bargain for a total of $7.98 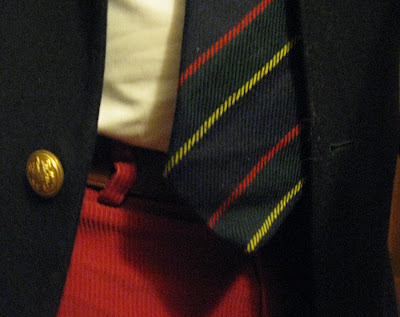 Finished off with a very thick wool tie from Scotland, $.99, 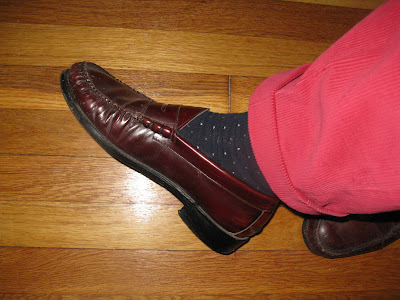 and the ubiquitous penny loafers.

This evening after supper, I donned this outfit and headed into the city, for a sort of architecture related social hour being co-sponsored by the Boston Society of Architects. I figured I might be able to do some "networking". I hate that word almost as much as I hate the practice. Trying to find a job by yacking with strangers over cocktails is something I find abhorrent, but I'm trying to learn, as this is apparently the way things are done these days. Anyway...

I had a bad feeling as I arrived at a pseudo-fancy bar with a velvet rope out front and a bouncer in an ill-fitting suit guarding the entry. But I thought, what the hell, I'm already here...

Inside, the place is dark and incredibly loud, packed back to front with what Mrs. G. might call "Go People". (If I have to explain go-people to you, you probably won't get it.) I could practically hear them thinking "whose the weirdo on the red pants?' So I push my way to the bar and order an Old-Fashioned form the sl*tty bartendress. Her face dropped. She ran down to the other end of the bar, talked to the other sl*tty bartendress, and then to the jock bartenders. Five minutes later she returns and says "I can't make that." (not "I'm sorry, but I can't make an Old Fashioned. Would you care for something else?" just "I can't make that.") Perhaps I should have ordered an oversised martini glass filled with overpriced vodka and brightly colored scnaaps.

So in an effort to be gracious, I order a Crown Royal Manhattan on the rocks, which she fixes perfectly, then tells me I owe her fourteen dollars! Given the fact that my jacket, tie and shirt didn't cost that much combined, I was fairly appalled. So I drank up my whiskey, got my coat and high-tailed it out of there. The entire ordeal lasted about twenty minutes.

The night was not a total loss, far from it in fact. The weather was beautiful, just cold enough and wonderfully clear. Boston Common looked lovely in the snow, people were ice skating outside, and it was not even eight o'clock yet. So I stopped by L.J.Perretti, 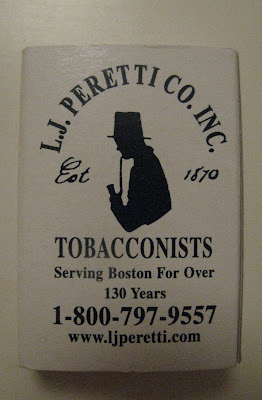 bought myself a nice cigar, and took a stroll. I wandered through the Public Garden, past the Swan Boat Pond, then down the old brick sidewalks of Charles Street for some window shopping at the pricey antique shops and art galleries. From there I meandered up the narrow old streets of Beacon Hill, past Louisburg Square, admiring some of Boston's most famous architecture, the beautiful old brownstones behind the State House.

Turns out that's what this outfit was for after all. On old Beacon Hill, nobody thinks twice about a man in red pants and a blazer.

Mrs. G. wasn't even upset that I stunk of cigar when I returned. All in all, a pleasant evening.

Great look. The blazer looks great with the new buttons. I know what you mean by 'Go People'. They are everywhere, which means we will probably have to work with them. Sounds like you made a good move by ankling out of there early. Any bartender that can't make a classic drink should be shown the door. Really. What did you fire up from L.J. Perretti? If you came to Tokyo you would have to settle for Cuban. Cheers, HTJ

Hope yer luck turns soon mate. As McCawber so often put it "something will turn up."

At least your tobacconist is still open. In Glasgow up until recently we had 2, Herbert Love's in George Square and Graham's inSt. Vincent street. Both now sadly defunct. In order to procure tobacco and requisites now one has to send to England Boo! Hiss!

So hard to find a decent bartender. I asked for a Mt. Gay & Tonic recently and got it with club soda instead. When I complained, the chickie bartenderette said that she didn't know that there was a difference between club soda and tonic water.

Giuseppe - outfit is great. Funny, I always thought architects were individualists and would have appreciated what you wore. Perhaps I am dating myself.

Cyclo2000 - you're killing me with the Micawber comment. One of my favorite characters in all of literature, but I hadn't thought of that line in a while.

The cigar was a Qunitero robusto, from Honduras I think. Somewhat on the short, thick side, with a dark wrapper, the smoke was medium to full bodied, rich and creamy. It drew clean ans smooth, kept me busy for a good 40 minutes. No Cuban, but a good smoke for five bucks.

I hope something turns up soon, brother. Thanks for the encouragement.

I thought I was the last non-prate who drank rum and tonic. I love that drink.

Architects are an individualistic bunch, but these days that tends to mean untucked shirts and unshaved faces. I fear they may see me as a stuffed shirt. It is ironic, though, that being the only one around who dresses the way I do, I am in fact more individual...smallest violin.

I agree completely with all of your comments Giuseppe. Story of my life, as they say. I think it's true that we will have to learn to work with the "go people" (that term is spot-on by the way)In my experience, some of them are good people, if you can look past the untucked shirts and scruffy faces.

a funny about the old fashioned,

once, when i was 18 and at a bar ordering my first (illegal) drink, i didn't know what to order. so, i decided to order an old fashioned, because that is what my grandmother always ordered. i figured i could stomach it if she could at 75...not smart. the bartender had to know, because i swear i saw him laughing at me when i took the first sip. i still haven't graduated to the old fashioned yet, maybe some day!

One of your best posts ever!

One of the greatest ties ever!

I was pleasantly surprised to see that Peretti is still in business. I used to order pipe tobacco from them forty years ago when I lived in California. (Also ordered from Leavitt and Peirce of Harvard Square).

Here's a Leavitt and Peirce catalog from 1968-69. Click on each page to see the entire catalog:

You make me want to get out my red cords and wear them.

So funny about the bartender. All most bartenders know today are drinks made with Grey Goose or Jagermeister (yuck!)

I have to agree this is a great post! At 22 years old, I would have a hard time pulling those pants off, however, that tie is remarkable!