In the legal profession, establishing precedent is essential in making a viable argument. So too, I suppose, in matters sartorial. 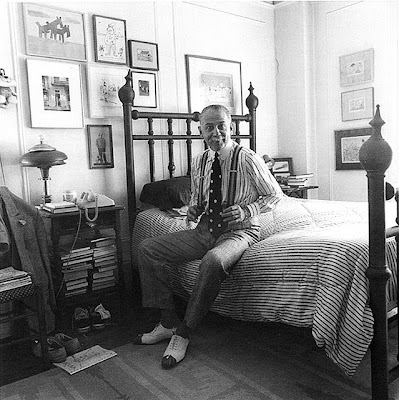 The late great Richard Merkin was undeniably a stylish gent. Love him or hate him, you gotta give the guy credit for individuality and sheer panache, albeit with a decidedly 1930s bent. Note the collar of his shirt. White, in contrast to the stripes of the rest of the shirt. Rounded points, so it's a club collar, right? No way the points are too long! Outrageous! 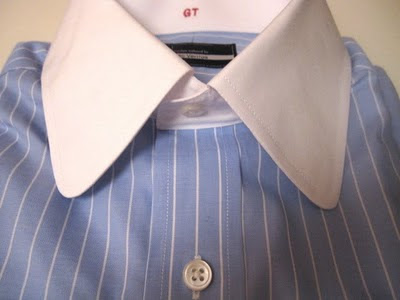 At least that's kind of the response I got to my own so-called club collars, on my own round of made to measure shirts. Sure, they are a bit flamboyant, the mark of a peacock, really. But you already knew I was a peacock, right? I mean, really, what kind of guy posts pictures of his own clothes online as an example of style anyway? Bravado, plain and simple, and I'm guilty as charged. 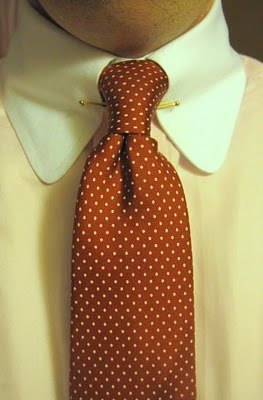 I even wear mine pinned, a la Merkin. Don't get me wrong, I'm not even trying to put myself in the same ballpark with him, never mind league. But, I did have some shirts made that caused a minor ruckus, that were not unlike his. Just sayin'...
Too bad Merkin never had a blog....now that would have been something, no?

It's obvious from his photo that his collar points were not a long as yours!

Now, I love those rounded collars, but I do think they are too long to be called "club".

That said, I would not hesitate to put you in Merkin's league. You really bring it home and (in my humble opinion) never miss the mark.

The peacock route is the very best.

I, too, own a longer rounded collared shirt, or 4.
While Merkin's points may not be as long it does look longer than those generally accepted as a club.

Not to be immature, but I just spit coffee all over my monitor when I noticed the picture of the dogs on Mr. Merkin's wall...

I think you mean "league with him, never mind ball park". I can definitely see myself doing a club collar with pin, but I don't have the guts to go all the way with the contrasting collar. Kudos to you and your feathers. But between your and Conor's examples, I've begun to get the guts to break some rules, which makes me a happier person.

Hear, hear! I have always had a bit of the clotheshorse in me (much to my wife's chagrin), but had started to get a bit staid and, well, stale in my apparel--before I encountered our friend Giuseppe online. I think I dress better due to his influence, and I definitely like the way I dress better.

Pinned club (or club-like) collars? It's the only way to wear them!

The next time someone offers you a free MTM shirt, how about going for a button down club collar? That would drive the purists in-SANE!

Both your collar and Merkin's are "rounded point" collars.

Am I the only one who noticed the painting of the dogs engaging in coitus? (Top left)

Mercator...they are "making love" not simply coitifying each other. There's a huge difference.

Look at those shoes, and size of the polka dots. Don't worry, you're quite mild comparably.

ADG - my humblest apologies. It was not my intention to devalue their beautiful canine connection.