New Shoes (not really) and a Little Rant

I just had my penny loafers resoled. They are the shoes I wear most, and had started to develop holes in the bottom. Now, I know its like some kind of Preppy tradition to fix your loafers with duct tape or something, but I didn't go to Yale in 1966 and I'm not one to take things quite that far. Besides, these days something as straightforward and old fashioned as visiting the local cobbler is almost a pleasure unto itself, and in the end you wind up with anew pair of shoes that are really comfortable because they're actually your favorite old shoes. A win-win situation, if you ask me. 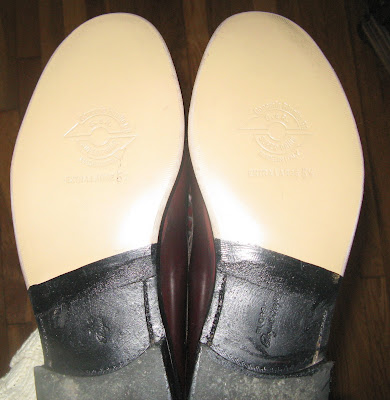 The replacement half soles were made in Italy. They're almost nicer than the shoes themselves. 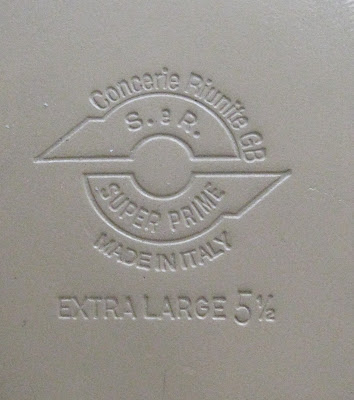 I like to keep my shoes polished, but there's no substitute for a professional cobblers shine. Like new, only better, because they're not. 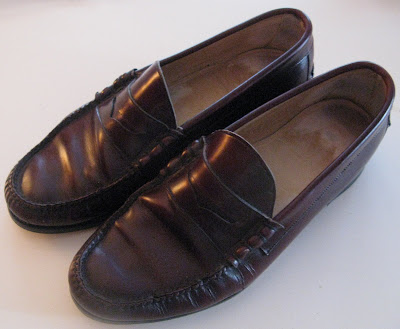 I brought these to a little shop near my house marked only with a small sign thatread "Shoes Repaired". Inside, I find a talkative older man, Armenian I think. He's proud of his craft, and won't hesitate to explain to you the importance of proper shoe care or a good cobbler. At great length. The chemical smell of shoe polish mixed with the smell of leather is enough to make you pass out in this tiny place. It was great. I almost wished I had more shoes to fix just so I could have an excuse to visit this place more often. This kind of thing restores my faith in humanity.

Which is good, as my faith in humanity needed a bit of restoration today. This week, the help checks from old Uncle Sam dried up and I had to go to the unemployment office to file for an extension. When I got there, I had to navigate past a bunch of drunks right outside the front door on the verge of a fist fight, through a metal detector and into a room full of men who reeked of cigarettes and booze, swearing loudly into their cellphones. Now I know that unemployment is something I pay taxes for and that there's no shame in a hard working family man collecting it in hard times(at least that's what everyone keeps telling me), but it can be hard to rise above it when you're met with a scene like that, instead of a long line of men in suits: 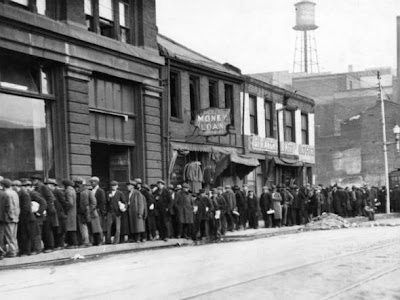 Not to romanticize the past too much, I'm sure plenty of these guys also reeked of booze, despite prohibition.

On the bright side, the staff at the unemployment office were excessively nice to me, despite their reputation. It was busy in there today, and I think I may have been the only person they spoke to who showered, shaved , put on a tie and was polite with them, and they repaid me in kind. My hats off to them for dealing with surly characters all day long. Having worked in liquor stores for years, I know how that can be.

But I digress. Back to the shoes. $20 Florsheim penny loafers+ 2 years of hard wear+ $38 repair + more years of hard wearing= a pretty sound footwear investment. If you don't have a cobbler in your town, move to one that does. For the man who wishes to build an affordable wardrobe, good repair is paramount, and in this regard the cobbler is second only to the tailor in importance. If you're lucky enough to find a good one as I have, stick with him and don't p*ss him off.

I love my local cobbler. Not just for shoes, but to add holes to belts and repair handbags! I always feel a bit guilty that they charge so little, NYC rent being what it is. I have a pair of Cole Hann's that are in a bag near the door waiting for their date with the cobbler.

I too recently had a couple of brogues repaired. I was thinking of pitching them (shame on me), but I'm glad I didn't. With new soles, they now have years of wear left.

I think we're all amused and captivated by someone in modern society who actually fixes things. Were so used to throwing everything out.

Not being a very motivated individual, my light brown brogues have yet to be re-soled. I was a little worried about the cost, but seeing that yours only cost $38 I will take the effort to bring the shoes to a cobbler. I don't want to lose those babies.

This post is fantastic on so many levels. I found a good cobbler by my office who I have taken nearly every pair of my shoes to have resoled and polished over the past year. "Like new, only better, because they're not." Absolutely. It's like the time my dad oiled up his old baseball glove and handed it to me as a kid.

This year I also began having him put heel plates on my shoes, which has been a huge help since I live and work about 1/2 mile from the subway, so I walk a lot, and every day.

glad you decided against the duct tape. i never think about resoling shoes. women just buy a new pair, which is so wasteful! i should change my ways.

Thanks for another great post. It is so refreshing to find someone who values value on the web.

At the risk of sounding overly cheap, I have been debating the same resoling for my 2 year old Sebagos. I love them, but since I only paid about $35 on ebay, it seems a waste to pay $45+ to resole them (I live in a more expensive city), as opposed to finding another pair from ebay.

How do I chose between resole and new?

My grandfather came from Poland and learned how to make shoes in Chicago around 1917. He moved to Denver and opened his shoe repair shop... "Chester's" ... in an immigrant neighborhood called Globeville.

He thrived and was making hundreds each week fixing shoes and boots. No one tossed shoes then, the Depression worked in his favor. He always called himself a shoemaker, never a cobbler, but I don't know why.

Your comments about the smells of the dyes, the glues, the leather are ring true since I grew up in a one bedroom apartment that was in back of the coal-heated shoe store.

I was born seeing wonders of shoe repair. After all Grandpa could have a mouthful of nails, a shoe hammer in hand, and take care of a customer at the same time.

You should talk about the shops that re-build shoes and boots from the ground up. I'm having a pair of Tony Lama's rebuild as this is being written.